One of our special guest DJs at the next Slow Dance Experiment in Sydney is Matt Aubusson, best known from the Glitch series of parties in Sydney in the mid 2000s. We asked him a few questions so you can get to know a little bit more about him… 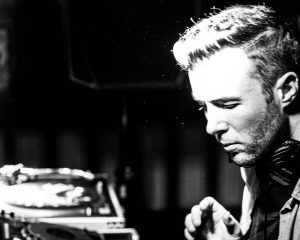 When/where/how did you start DJing?

I took up DJing around 1999. Prior to that, I wasn’t into electronic music at all; I was heavily into prog rock, bits of weird blues and metal. My girlfriend at the time, on the other hand, was very much into electronic music and took me to my first rave…and I had an OK time. Seriously, I could have taken it or left it in that moment. Funnily enough though, not long afterwards I went to Club 77, had an awesome night and was hooked. As luck would have it, a friend of mine bought some turntables around the same time, I started playing on them and the rest is history. My first gig was at the Macquarie Uni bar and then I think the Dendy following that. For those whose time this was before, the Dendy is now the IGA supermarket underneath the MLC Centre. Every time I’m there, I try and work out where the DJ booth used to be.

I then graduated to different one-off events around Sydney. At that time, I didn’t feel like there was a home in Sydney for the music I played, so along with Dave Choe, we started a party called Glitch in early 2004. That launched a more active decade where we toured and hosted bunch of international artists like Superpitcher, Matthew Dear and Magda, ran a couple of other parties, had a radio show on FBI 94.5, started playing at the bigger events and festivals in Sydney, interstate at clubs like Honkytonks and Revolver, and then eventually overseas – fun times

Where do you play these days?

For the past couple of years, I’ve taken a step back from DJing in clubs to focus on another passion of mine. Most recently prior, I was playing at S.A.S.H and was a resident of Strange Fruit at the Abercrombie. On a whim, I played a party in December last year and got the itch to start playing in clubs again, so I’m really excited to be scratching that itch at 77!

What else do you do?

This would be the other passion of mine. I work for a company with an animal in its logo, on something to do with machine learning, but despite my passion for it, that’s about all I can say on that subject unfortunately…such mystery!

The list is pretty niche. I love reading about behavioural economics and the like, and I’m currently deep down the rabbit hole on individual treatment effects. On that note, the next time you’re on a Netflix binge, pause for a minute to reflect on the fact that you’re part of a massive set of experiments to see whether Netflix can influence your viewing behaviour with different experiences (aka treatments). Hot tip: they can and they do.

Although technically not a colour, black.

The squeaky sound that dry snow makes under your feet as you walk through it on a quiet night. So ASMR!

It’s so hard to narrow it down to the favourite! One that stands out was when Michael Mayer played our ‘Glitch’ party back in 2005 on his first visit to Australia. The DJ we had booked to play after him came up to me while Michael was playing and said, “I’ve never done this before, but something special is happening here tonight, Michael should play through my set.” Having started at 1am, Michael kept playing until 7am when the club’s owners turned the lights on with a full dancefloor, and then still didn’t stop playing until they suggested they may need to physically remove him from the decks. To this day, people will occasionally mention that night to me when I’m out and about in Sydney; it’s nice that other people share the memory too.

Dave Choe, my partner from Glitch, and I played Field Day in 2007 and left our record bags backstage after our set. Upon returning to collect them, Dave discovered his had gone missing. After much frantic searching we discovered one of the headline acts had taken it to their gig in Melbourne by mistake. Despite promises of a handoff to a DJ flying back to Sydney, they never managed to get it back to him…which sounds like a boring story, until we fast forward two years and Dave and I were supporting the same headline act at another festival. Got to chatting about said record bag and they proceed to tell us an epic story that ends with airport security boarding the plane they were sitting on, asking whether anyone on the flight had left a bag in a bin (WTF?), and when they sheepishly admitted to it, advising them that the bag had been removed and destroyed as a security precaution! They apologised profusely and gave Dave a tonne of promos.

I think there’s so much more freedom to experiment with different genres and moods when I play in the 100 – 115 BPM range, and I like the challenge of making it all hang together in a cohesive way. I love being able to play bits of broken beat, downtempo, nu-disco, house, electro and slow-mo techno all in the one set, rather than locking into a groove of a single genre for a couple of hours. It just fits my musical vibe too – a lot of it has bluesy, rocky, guitar-driven elements, which I’ve always felt a connection with.

Dreems & Drugface – On the Prowl

D-Pulse – All I Have (Kasper Bjorke Remix)

I am very good at clumsily knocking things over and then catching them like a ninja before they hit the floor.

I’ve been pescatarian for about 10 years, with a year-long stint as a vegan.

I only read non-fiction.

I have two professional football players in my family, and yet I have zero skill in this area.