Henry and Tom Johnstone are two brothers that share a love of music, DJing together as Henners and TJ. We’re pleased to have them play some slow beats for us at the Slow Dance Experiment. 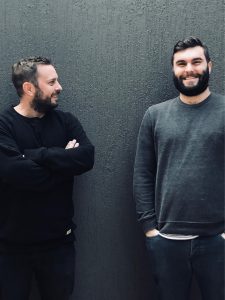 When/where/how did you start DJing?

Henners: The same old story really. As a bunch of teens/early 20-somethings who loved dance music and clubbing, there was often decks set up at a kick-on where everyone would have a go of mixing. That led to me buying my own set of Technics and collecting records (RIP Spank! Records). Later down the track I got my first taste of playing outside the bedroom at Manly Wharf Hotel. It just grew from there!

TJ: I started mucking around on Traktor – I’m pretty sure it was the first version as it was very basic. I would also have a few sessions with Henry on the turntables, which definitely honed my ear quicker and further. From there it was on to DJing 18th and 21st birthdays for my mates.

Where do you play these days?

Anywhere and everywhere we can! We’re both into a bunch of different styles, moods and tempos of music, so we love to play at as many different kinds of gigs we get the opportunity to. We’ve played at SASH, Café Del Mar, Vivid Sydney, Slyfox and annually at Lost Paradise festival.

What else do you do?

Henners: I work as a freelance writer – for the past year or so mainly in property copywriting. I’ve also become obsessed with evening walks of late while listening to a great podcast called ‘The Evolution of Horror.’

TJ: IT Sales fills the day job. I also quite enjoy chess. I’m still pretty awful and don’t play often enough but I enjoy watching and learning from the Grandmasters online.

Henners: That “ding” that lets you know you can now remove your seatbelt and get off the damn plane.

TJ: A storm with the rain absolutely pelting down at night while falling asleep.

Henners: Steve Lawler at Home Nightclub in Sydney circa 2001/2002 always seems to come back to me; it was kind of revelatory. I also went to Ibiza for the first time last year at the ripe age of 34, which instilled some wonderful memories. Can’t wait to go back.

TJ: Sasha playing at The Island in 2013. With Sydney experiencing one of the heaviest rainfalls in recent couple of years on the day, an already intimate set became even more special, all with the Sydney Harbour Bridge as the backdrop.

Henners: Hmmmm, don’t really have any. How about a clubbing story? I have a photo of myself and a mate sitting in the back of a newspaper delivery van after a night out during the WMC. We actually have no idea of the story behind the photo, but we like to think that we helped deliver South Beach their daily news that morning.

TJ: Nothing overly crazy for me yet. Still plenty of time left though!

There’s a great freedom to playing slower BPMs as there is so such diversity in sound from producers making slo-mo jams. It’s just really refreshing. We love it.

We chose a bunch of dance and non-dancefloor jams…

Top 5 whatever, your choice

Henry also runs a most excellent podcast called Lazy Daze, check it out on the link below…